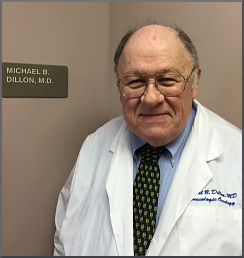 Dr. Michael B Dillon graduated from Georgetown University with a B.S. in Chemistry before pursuing furthering his education by graduating with an M.D. From Georgetown University School of Medicine. Dr. Dillon joined the staff at The Johns Hopkins Hospital to complete his internship and residency, eventually becoming the Chief Resident and Residency Director of the program. After receiving his certification in Gynecologic Oncology, Dr. Dillon also shared his expertise in the classroom as a professor of Gynecology and Obstetrics. With over forty years of experience, Dr. Dillon maintains his passion for his practice and continues to offer his patients the highest quality and standards of care.